When the network of satellites designed to control the global climate starts to attack Earth, it’s a race against the clock for its creator to uncover the real threat before a worldwide Geostorm wipes out everything and everyone. (IMDb)
Sloppy plotting (turns out hacking into the White House secret files is a breeze), mediocre CGI, awfully cheesy dialogue and narration, but so help me, I’m a sucker for these globe-hopping movies with intense place title cards (HONG KONG. 9:32AM) that pop up every two minutes at the bottom of the screen. A dose of political thrills adds some pointed suspense to the jumbo disaster action, and the tension released in the final act shows the film was decently effective even if poorly crafted.
5.5/10 (Poor)

Federal Agent Eliot Ness sets out to stop Al Capone; because of rampant corruption, he assembles a small, hand-picked team. (IMDb)
Aside from an excellent jazzy score and a great looking 1940s set, this film is largely underwhelming: Its compelling cop vs. Capone true tale is lost amidst a script that breezes through simple plot points with little development or character study, and a notable cast gives middling performances (apart from an underused DeNiro) thanks in part to often unmemorable dialogue. The dashes of bloody violence (“TOUCHABLE”) grab you but they don’t make up for the mostly weak writing here.
6.5/10 (Alright)

Danny Ocean rounds up the boys for a third heist, after casino owner Willy Bank double-crosses one of the original eleven, Reuben Tishkoff. (IMDb)
Convoluted intro aside, the con job here is arguably–despite its unconvincing foundation–the crew’s most memorable: A delightful many-layered sabotage that pushes the boys outside their box to Mexico and even back to an old foe, sees the other 10 (minus Rusty) get a true chance at the spotlight, and moves them into a more satisfying and refreshing Robin Hood/anarchistic mindset. The dialogue and editing here aren’t on the same level as 11 and 12, but the caper might just be the best.
7.5/10 (Really Good) 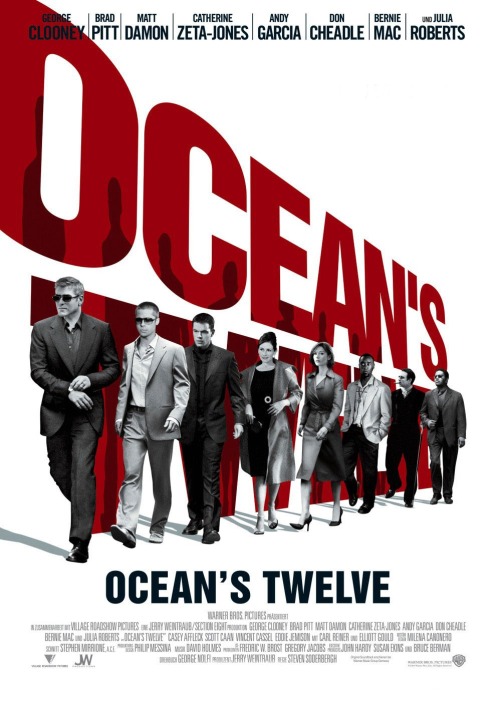 Daniel Ocean recruits one more team member so he can pull off three major European heists in this sequel to Ocean’s 11. (IMDb)
The great style from the first film is still present here in the artsy titles, delicious dialogue, and rambunctious soundtrack, but the substance is different: There’s more comedy and humbling mishaps (the Julia Roberts scene is great), but there are also more characters (an overload), and a disappointing lack of actual heists considering the wealth of other plot material that’s jammed in. It’s a bit of a messy story, with a weak climax to boot, but the film still doesn’t fail to entertain.
7/10 (Good) Danny Ocean and his eleven accomplices plan to rob three Las Vegas casinos simultaneously. (IMDb)
This film would be entertaining enough with just a neat, elaborate heist (which it has), but it takes it up a notch with a steady stream of quick and witty dialogue, smoothly delivered by the effortlessly charismatic Clooney and Pitt, matching the brilliance of their cool schemes punch for punch. The editing is just as slick, with retro slide scene transitions and a chill Vegas-flavoured soundtrack. The “got the girl” ending is the only thing that’s a bit distasteful in this great caper flick.
8/10 (Great)
Loading Comments...