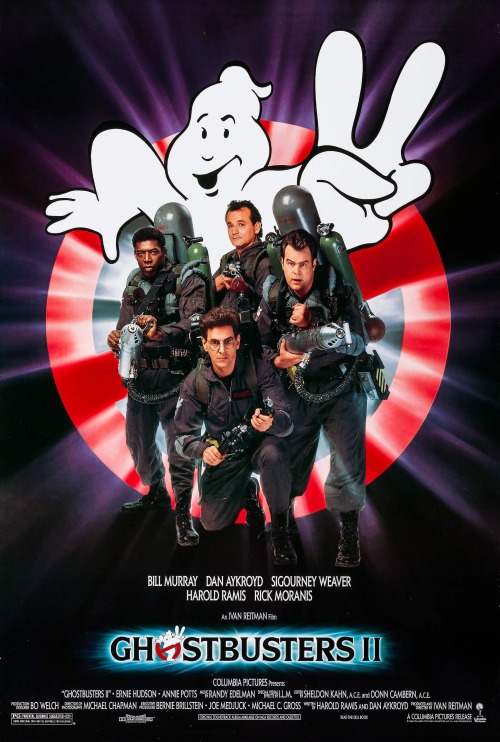 The discovery of a massive river of ectoplasm and a resurgence of spectral activity allows the staff of Ghostbusters to revive the business. (IMDb)
The fall from grace and quick rise back to it feels as contrived as it did in the first movie, but the pink slime plot following this is quite enjoyable in its investigation/teamwork angle (the ‘busters are always better together) and “positive emotion” climax. Venkman still slips in some misogyny here and there but it’s mostly overshadowed by the film’s good smattering of quirky comedy elsewhere (Louis’ opening statement was a riot: “Because one time, I turned into a dog and they helped me”).
6.5/10 (Alright)

Three former parapsychology professors set up shop as a unique ghost removal service. (IMDb)
I mean, it’s alright. The original trio have a good amount of chemistry together (Ramis the nerd, Murray the deadpan cool guy, Aykroyd the straight man) but on his own Murray’s schtick gets misogynist and tiresome real quick. Plot-wise, their rise to success feels too sudden and honestly, it’s way more enjoyable early on when they’re down-on-their-luck underdogs. The wild apocalyptic elements contrast nicely with the crew’s dry, down-to-earth vibes but highlight some terrible visual effects.
6.5/10 (Alright)

A Chicago man’s hope for a peaceful family vacation in the woods is shattered when the annoying in-laws drop in. (IMDb)
Remarkably unremarkable, with a predictable comedic plot that’s not even done particularly well. The central character dynamic between Candy’s down-to-earth dad and Aykroyd’s obnoxious rich guy lacks a certain zest, and most of the gags are either bland or go on way too long (see the water-skiing slapstick; unbearable bear story). Buck’s pointless and uninteresting romantic side plot does nothing to spice things up, while the final act development for Roman feels a little out of place.
5/10 (Poor)

An old Jewish woman and her African-American chauffeur in the American South have a relationship that grows and improves over the years. (IMDb)
With good acting, charming dialogue, and cute Americana sets over a cozy 20 year span, the film has a mature subtlety to it that makes for pleasant viewing, whether it’s the early crotchety-old-lady comedy or the feel-good fodder later on (see the graveyard scene). Yet as many potential points of conflict come and go without ever really developing you’re left wanting and waiting for some dramatic weight that never comes: The final scene was cute, then, but could’ve been a lot more meaningful.
7/10 (Good)

An incumbent congressman embroiled in personal scandal faces a no-holds-barred challenge from a naive newcomer funded by two unscrupulous billionaire lobbyist brothers. (IMDb)
The American political satire has its moments, particularly early on as Brady is introduced (“America. Jesus. Freedom.”) and Huggins learns the ropes, but it quickly wears thin, with only occasional outside relief (see the uproarious Huggins family confessional), as its growing ridiculousness offers more misses (see the CGI baby-punching) than hits (see the popularity-increasing sex tape and shooting), and bland side-characters (see the Motch bros) don’t help. It ends nicely though.
6/10 (Mediocre)

With their daughter away, the Kranks decide to skip Christmas altogether until she decides to come home, causing an uproar when they have to celebrate the holiday at the last minute. (IMDb)
The story-writing is beyond sloppy (why is Blair all of a sudden coming home again?), there are obvious continuity goofs (Luther’s tan and Botox-ed eyebrows disappear quite quickly), and a lot of the acting is cringe-worthy, but Allen (playing his usual sarcastic guy’s guy) and Curtis (a Christmas-vest wearing and knitting mom’s mom) are both solid amidst the “crazy Christmas” comedy plot that has enough funny moments to make up for its cheap chintz (Santa makes quite an unnecessary appearance).
6/10 (Mediocre)

After losing her job and learning that her husband has been unfaithful, a woman hits the road with her profane, hard-drinking grandmother. (IMDb)
McCarthy is the only highlight here; her trademark blend of self-deprecating slapstick and decidedly “unfeminine” and unaware mannerisms produces lots of laughs throughout. Elsewhere, Sarandon is awfully awkward and forms a terribly miscast three generations of women with Janney and McCarthy. The rest of the oddly stacked cast flounders amidst the film’s weak attempt at being a romantic dramedy, with its contrived storylines and insubstantial characters. Some good comedy here but not much else.
5.5/10 (Poor)