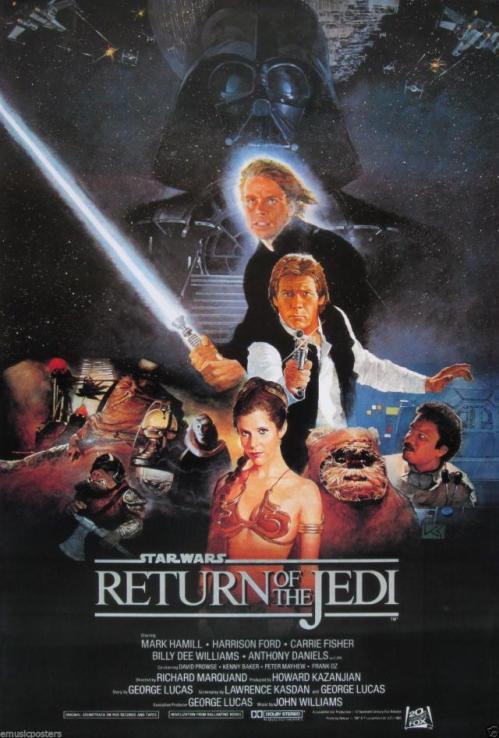 After rescuing Han Solo from the palace of Jabba the Hutt, the rebels attempt to destroy the second Death Star, while Luke struggles to make Vader return from the dark side of the Force. (IMDb)
A rambunctiously fun reunion and escape sequence starts things off well, but the fresh forest setting of Endor to follow brings with it some bad green-screened flying scenes (but a decent battle later), a campy captured-by-natives tangent (the Ewoks do have their charm though), and consistently wooden dialogue. Luke’s climactic confrontation with Vader and the Emperor, meanwhile, is overly simplistic and repetitive (“Join the dark side, feel the hate”; “No, I won’t fight”; fight, stop, etc.).
6.5/10 (Alright)

Luke Skywalker joins forces with a Jedi Knight, a cocky pilot, a wookiee and two droids to save the galaxy from the Empire’s world-destroying battle-station, while also attempting to rescue Princess Leia from the evil Darth Vader. (IMDb)
Dated special effects, occasional over-acting (see Hamill and Fisher), and a cheesy ending are overcome by a classically engaging good vs. evil story set in an imaginative universe that smartly starts in media res and is filled with a colourful and complimentary cast of characters: The angsty young Luke and wise old Obi-Wan; the cocky Han Solo and equally headstrong Leia; the uptight C3PO and brave R2D2 (who, along with the charming Chewbacca are remarkably relatable for being unintelligible).
7.5/10 (Really Good)
Loading Comments...