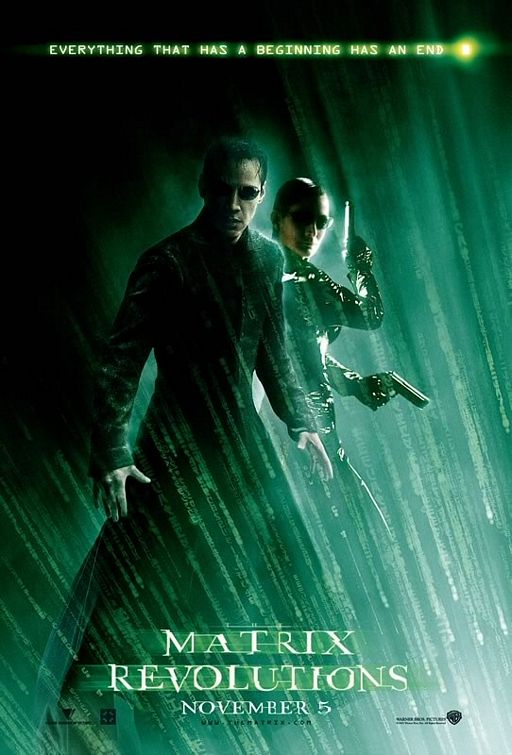 The human city of Zion defends itself against the massive invasion of the machines as Neo fights to end the war at another front while also opposing the rogue Agent Smith. (Letterboxd)
There’s a lot of stuff packed into this plot and it’s hard to make sense of it all, but as a trilogy finale it has a satisfying amount of fittingly epic highs and lows (see the grueling battle for Zion, ominous and lonely lovers’ mission to the Machine City, the unique climactic deal and defeat) to go with its hit or miss philosophical quips (Agent Smith’s frustrated post-fight speech was a highlight: “You can’t win. It’s pointless to keep fighting. Why, Mr. Anderson? Why? Why do you persist?”).
7/10 (Good)

Freedom fighters Neo, Trinity and Morpheus continue to lead the revolt against the Machine Army, unleashing their arsenal of extraordinary skills and weaponry against the systematic forces of repression and exploitation. (IMDb)
It’s slow to load, with its first half marred by lifeless fight scenes (see the Chinatown fight which Neo just leaves after a while) and too much talking about who knows what (see the convos with the Oracle, Hamann), not to mention that over-indulgent dance/sex scene. On the freeway things pick up speed; the chase sequence is incredible and the final talk actually lands some philosophical punches (see Morpheus’ wind knocked out: “I have dreamed a dream, but now that dream has gone from me”).
7/10 (Good)

The Madagascar animals join a struggling European circus to get back to New York, but find themselves being pursued by a psychotic animal control officer. (IMDb)
More entertaining than ever: The increased “fish out of water” animals vs. humans antics make for loads of hilarious action set pieces (see the insane truck then plane escape from Monte Carlo), the goofy one-off bits are taken to another level (see DuBois’ rousing French song; Rock’s gut-busting Afro-circus bit), and the new circus setting provides two infectious feel-good musical numbers. The plot, meanwhile, continually takes wonderfully unexpected turns (see the poignant return to the zoo).
7.5/10 (Really Good)

The animals try to fly back to New York City, but crash-land on an African wildlife refuge, where Alex is reunited with his parents. (IMDb)
Starts off a little rough with a cheesy flashback, yet another rendition of “Move It” (enough already), and a contrived four-fold character-growth set-up in a far-fetched multi-animal tribe, but the penguins keep you engaged (I’ll never tire of their hijinx) and the adventure plot sparked by a touching Alex-Marty moment picks things up with a number of memorable scenes both hilarious (see Julian’s sacrifice bit; the Penguins’ union negotiations) and moving (see the father-son dance diversion).
6.5/10 (Alright) 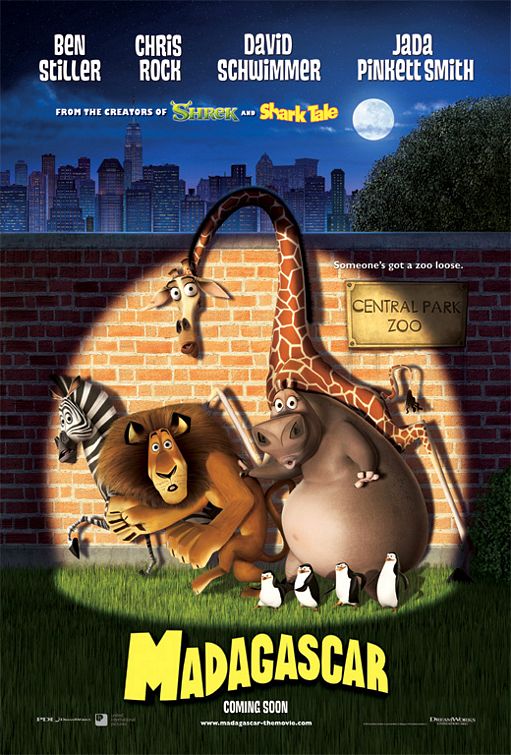 Spoiled by their upbringing and unaware of what wildlife really is, four animals from the New York Central Zoo escape, unwittingly assisted by four absconding penguins, and find themselves in Madagascar. (IMDb)
The four quirky animal friends (with their oddball supporting cast–the suave penguins are comedy gold) riff nicely off each other, and the comedy is only bolstered by the silly realism-pushing settings and situations (see the lax luxury of the zoo; penguin ship hijack), good one-liners (“Well this sucks”) and fun visual gags (see Melman’s “We’re running out of time!” with a clock on his head). Alex and Marty’s friendship crisis, meanwhile, brings some surprisingly mature (if short-lived) drama.
7/10 (Good)